Hepatoprotective effect of Silymarin in cats 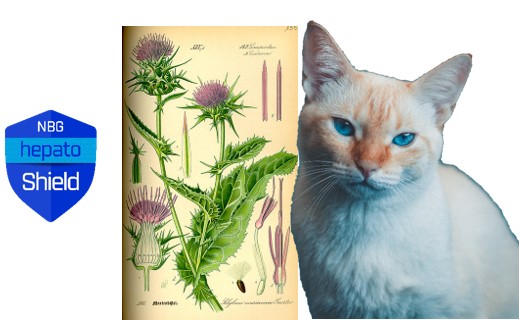 Milk thistle is a plant whose seeds contain silymarin, a flavonoid complex with hepatoprotective capacity, which is composed of a mixture of several flavolignans such as silybin A, silybin B, silydianin and silychristin, silybin being the most active molecule.

The main action of silymarin is that it behaves as a potent antioxidant that neutralizes free radicals at the hepatic level and thus appears to protect liver cells, especially when exposed to toxins, whether from mycotoxins, drugs or other origins.

There are also several studies showing how silymarin is able to protect animals against fatty liver disease or against pro-oxidant metabolic overloads that drain glutathione from the body, a molecule mainly produced in the liver.

In addition to all this, silymarin is also able to increase protein synthesis in the liver by stimulating polymerase I and RNA transcription, resulting in a large increase in the production of new liver cells to take the place of those damaged by hepatotoxins.

An important fact to keep in mind about silymarin is its low availability, so we recommend working with formulas rich in silybin and with enhanced availability, as we do at Nutribiogenics with NBG HepatoShield, a product with silymarin enhanced with our exclusive NBG Bioboost technology.