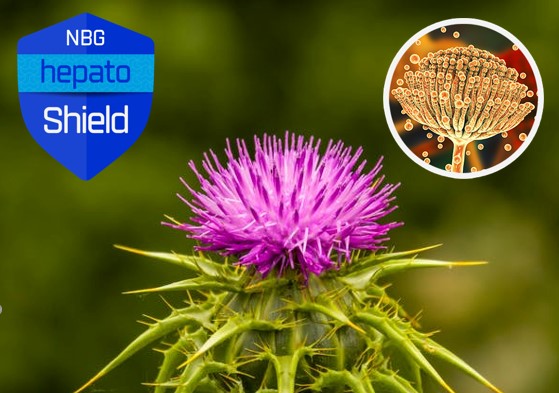 Currently dealing with mycotoxins in the diet with only a mycotoxin binder is something that in many cases shows inconsistent results.

From our point of view, the responsible is not the supplier of the toxin binder… the reason is due to mathematics.

Let me explain, if we consider that a low level of a certain mycotoxin… for example 25 ppb of OTA is enough to produce serious problems in animals, it is clear that only a toxin binder, for example, with 99% effectiveness in capturing OTA is not enough to control certain high levels of mycotoxins.

That is why this week we want to share with you a good alternative to use alone or combined with mycotoxin binders that from our point of view is very reliable, that works with or without mycotoxin challenge and that also has multiple other positive effects on metabolism, the alternative we refer to is NBG HepatoShield, which is a product made with Silymarin enhanced with our HHH® method.

In a recent trial, almost finished, NBG HepatoShield has been able to neutralize the negative effects of broiler diets with high levels of DON and FUM and has even improved the results against a control diet without mycotoxins!

But what is silymarin ?

Silymarin is an extract from the seeds of milk thistle ( Silybum marianum ) traditionally used in human nutrition to protect the liver, the very organ that neutralizes most mycotoxins and their metabolites.

Silymarin is composed of several flavonolignans such as silybin A and B which are potent metabolic antioxidants that seem to act efficiently in the liver tissue. It also seems to promote DNA and RNA synthesis contributing to hepatocyte replication and improving the level of antioxidant enzymes and peptides such as Glutathione.

Our trial is not yet published, but while preparing the write-up we are pleased to show an article that obtained similar results but with an unboosted source of silymarin, the difference between this product and NBG Hepatoshield is that our product is able to obtain the same effects with a dose at least 10 times lower.